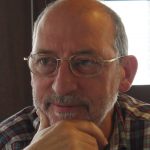 Jim has lived in Kirriemuir for 23 years having moved there from Dundee and the Full Gospel Church with his wife Angie and their family.  Soon after moving they joined with Strathmore Christian Fellowship and Jim quickly became a core part of the worship team. In time he took on the role of worship team leader and later served for 6 years as an elder. He is a guitarist and worship songwriter who loves to help and encourage others to write their own songs. Both Jim and Angie have been captured by Sannox, by the sense of God’s near presence and by the vision to see a centre for worship, creativity, rest and restoration there.

Ken was brought up in a Christian family, and soon became very involved in running Portrack Baptist Church in Stockton-on-Tees, eventually as a deacon and church secretary. It was during this period that Ken first met Roy Searle, when Roy took up his first pastorate at Portrack!

Later, after moving to Wensleydale, Ken experienced the “Toronto blessing”, became a Kinship leader in the North Yorkshire Vineyard, and after some years,  the pastor of the Dales Community Church.

Ken moved to Arran in 2003, and has been involved in Christian work on the Island, but specifically at Sannox from the beginning.

Ken is married to Jackie, and despite being “retired”, both are very busy, Ken particularly with part time consultancy work as a chemical engineer.

Jacqui McFaul lives in Dumfries and is married to Francis they have 5 children and 7 grandchildren.  She has worked as a Learning Assistant for children with severe and complex needs for the past 16 years and before that was a full-time mum. She became a Christian over 20 years ago and has a heart for God’s Word, Worship, prayer, Scotland, Israel and creative arts. Jacqui loves to see people flourish in their relationship with Jesus and believes that Sannox can help people achieve this and is excited about the future of the centre.  She was Worship Pastor along with her husband at a church in Wishaw for a number of years and now is a member of Dumfries Baptist Church.

Francis McFaul gave his heart to the Lord in 1986.  Since then he has served the Lord as a worship leader, singer and songwriter.  During that time he has been the worship leader at Clan Gathering and also the worship leader for an organization called European Apostolic Leaders.  He believes God has given him an apostolic ministry to mentor young worship leaders and to go to other churches helping them to set up worship teams.  Francis was the worship pastor for a number of years at a church in Wishaw.  In 2007 he was invited onto Arran to take part in a worship event and actually ended up leading worship in the chapel at Sannox and so began his continuing relationship with the Christian Centre.  Over the years he has continued to take part in events at Sannox and is now a member of the inhouse worship team that exists there.  Francis has also led worship at Ffald-y-brenin another Christian centre in west Wales.  Francis is completely commited to the ethos and mission statement of Sannox and has a heart to see people restored in the Lord.  He also has a vision for 24/7 worship and hopes to see tGilberthis develop at the centre.  Francis is married to Jacqui and have 5 children and 7 grandchildren and are members of the Baptist church in Dumfries.

an unchurched background, came to faith in the Cairngorms of Scotland and has been involved in pioneering, church planting, pastoring churches and establishing missional communities. He is one of the founders of the Northumbria Community, a geographically dispersed new monastic community that spans the world. A former President of the Baptist Union of Great Britain, Roy is now one of the denominations Pioneer Ambassadors. He is a Fellow of St John’s College, Durham and a tutor at Spurgeons College, London and visiting lecturer and speaker. A writer, mentor, spiritual director, retreat leader and popular speaker and a member of the Renovare Board, Roy brings a love of Arran, an island he has known for many years, a breadth of experience and some wisdom from his extensive ministry. He is currently engaged in writing, mentoring pioneers and advisory work with churches, communities and charities.

He and his wife live in Northumbria and they have four children and seven grandchildren. A keen sportsman, having hung up his football boots several years ago, he enjoys playing tennis, badminton, golf and curling and every opportunity to sail in the Inner Hebrides. He describes his ministry as seeking to encourage people to love God, think deeply and live generously.

Gilbert’s family have lived on Arran for generations and his home was in Sannox. They attended Corrie Free Church and, on occasions, Sannox Church. An early memory is of Rev Jean Thomson explaining Jesus as ‘Light of the world’ and His followers as ‘the light of the world’ – perhaps now finding greater fulfilment at SCC.

He and his wife attended Bible College in Berwick, a valued experience. They lived and worked in Israel for two years and he continued BD studies. He has revisited Israel in recent years and loves the land.  Later, they moved south to teach Religious Studies. He wrote GCSE courses on “Christianity”, “Gospels” and “Christian Perspectives on Contemporary Issues” that went to many schools in England and he taught A-Level New Testament and John’s Gospel.  They moved back to Scotland two years ago.  He serves on the Council of Reference for Kingdom Gathering. Having been part of evangelical Churches in several places, conservative and charismatic, they have respect for the greatness of Christ’s body. Experience of the powerful Presence of God and His Hand at work created a hunger to see more of that in the life of the Church.