At the end of April 2015 the Faith Mission came to Sannox to hold a mission to the Island in co-operation with the Sannox Christian Centre.

The week was the fulfilment of our God-given vision of two years ago of a tent alongside the centre. After this was given there was the question of what this might mean, but in the contacts with the Faith Mission all became clear, and as the tent mission progressed we saw God at work as we worshipped together, heard testimony of His work in peoples’ lives, and heard the Word proclaimed over the week. People came from many of the churches in Arran and shared fellowship together. Those who helped – both the Sannox Centre team and the Faith Mission Team – knew great joy in working together, and a new partnership in the work of the Kingdom developed.

And there was the open day at the end of the week with people enjoying each other’s company – with art, massage, guided walk, and ceilidh.

Two of those involved wrote:-

“I have enjoyed some wonderful fellowship with both the Sannox team and the Faith Mission team and have been challenged spiritually during the meetings. What a joy and encouragement it was for us to have such spiritual people share our home during the week. Many people from the churches have expressed being challenged and encouraged.”

“Many of us were greatly encouraged as the week progressed and for a few folk on the team it has been life changing. We have also heard of Arran folk who have been touched in many ways and it was an encouragement for them to see folk from various churches in a meeting together.”

It was also an affirmation of God’s working over the years, since it brought the Faith Mission to work in the very location where their founder, John Govan, had himself received God’s vision of an organisation that has been of immense significance especially in the rural parts of Scotland over the last 130 years. It is good to think that he may well have visited the Sannox church at that time.

And we go forward together in faith now to our own century as it unfolds. Do pray with us[/ezcol_2third] 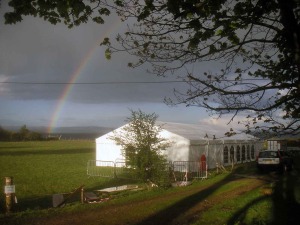 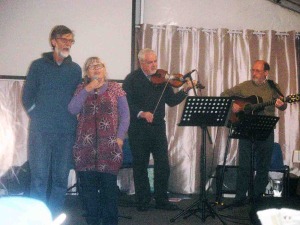