A Visit to Megantic County – Photo Story by David Pott

In August 2014, my wife Pam and I had the great privilege of visiting the place where the first immigrants from Arran, most of them members of Sannox Congregational Church, settled by Lac Joseph near Inverness in Megantic County Quebec. We arrived in Inverness with our friends David and Sue Lyon after nightfall and it took us a little while to find our hosts Terry and Ann Macmillan who built their home right by what is still called The Landing.

We had an enjoyable couple of hours starting to get to know Terry and Ann. Terry is directly descended from one of the two Macmillan families who were on that first ship The Caledonia which sailed from Lamlash to Quebec in 1829. We also had the great pleasure of meeting Sylvie Champagne a local historian and very lively personality with a rich fund of stories! 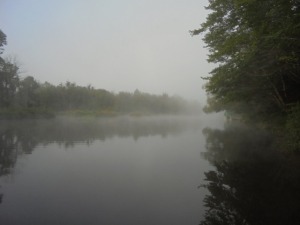 I woke up early the next morning and it was misty but it looked like it might clear so I slipped out and made my way down to The Landing which was only about 200 yards from the house. It was stunningly beautiful as the mist started to clear revealing Lac Joseph from the very place where those folk from Arran had first arrived 185 years ago! They called it Loch Lomond then.

On the path down to The Landing was this notice erected by Terry illustrating the first tented settlement which preceded the log cabins which they built before the second winter. There were about 100 settlers and most survived that first harsh winter but two children died. 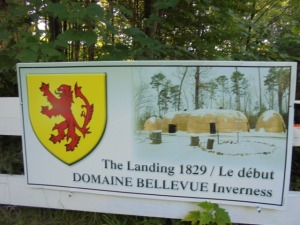 Later after breakfast, Terry gave us a tour of the site. We started back at The Landing and by now the mist had completely dispersed. The first settlement was quite well situated in that the lake with the adjoining river was well stocked with trout and also gave access to supplies at Inverness which was about 4 miles to the north. It was around this area that the first settlers were given 100 acres of land for each family. 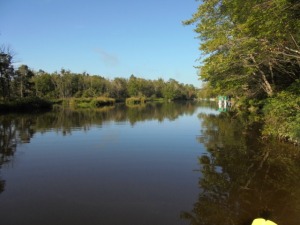 Terry then took us a little way into the woods to the appropriately named Moss Rock. This is a substantial rock about four feet high and was used by the settlers as their first meeting place and altar. It’s interesting to reflect that these settlers worshipped in the open air to begin with just like their forbears in Sannox and it was much later that they built a replica of Sannox Congregational Church. All of us were awed by this site and it felt like a sacred place where it was easy to imagine those settlers encountering the presence of God in a special way. 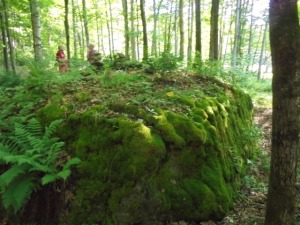 Also in the woods there were a number of circles of stones which Terry said were the original fire places of the settlers. David Lyon commented that surely it would be a very interesting site for an archaeological excavation. It would be fascinating to find out what tools or other implements they may have had with them in those early days. 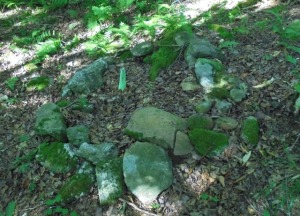 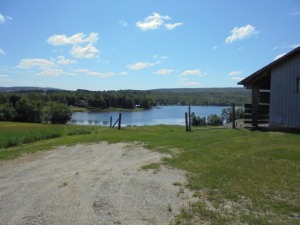 Terry then took us a mile or so eastwards along a road above the lake which soon broadened out and the farmland allowed for more extensive views of the attractive rolling countryside which in places reminded the settlers of Scotland. 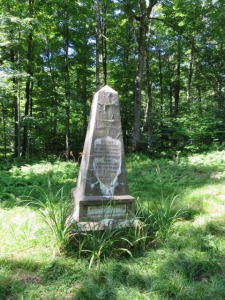 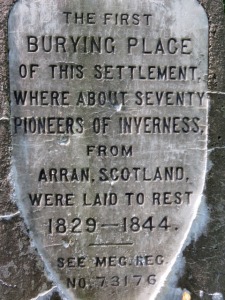 We walked into the woods again and Terry led us to this clearing which was the burying place of the first settlers. It was so simple with just a few low wooden crosses in the ground and this monument, as well as a place where we could record our visit in a book. 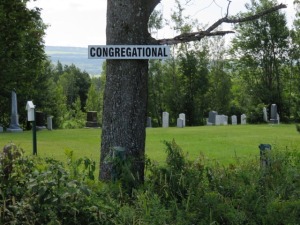 We then drove round to this location where the congregational church, which was a replica of Sannox, stood until 1949, but the cemetery is still here. Some of those buried at the original burying place were re-interred here. 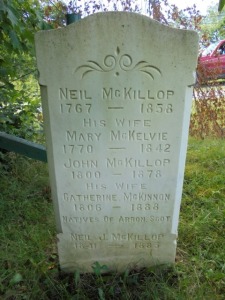 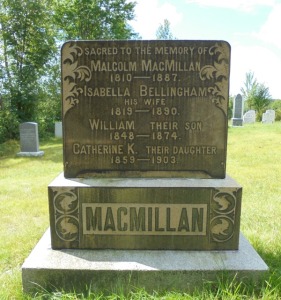 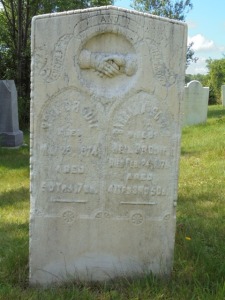 Here are some of the graves at the cemetery. On the left are the Brodies who were from Laggantuin, in the centre are Terry’s ancestors and on the right there are several more familiar Arran names! 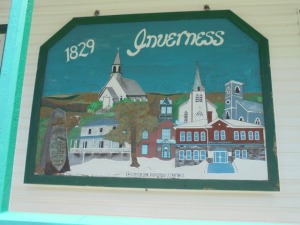 This was rather an attractive wooden plaque in Inverness highlighting 1829. 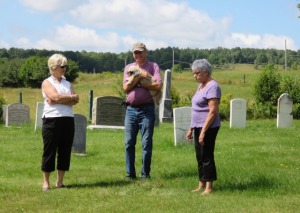 time with you which we will always treasure.

You can download David’s photo story in PDF format here.